Friday evening, after returning to Valparaiso from my visit to Santiago, I had suggested going to buy some spray paints to Jekse & Cines, as a Christmas present to them. I was going to meet them in the shop and was already a bit late, so I hurried along Avenue Independencia to where we had been paint shopping last time I was in Chile. However, when I found the place, I was told by the girl at the till that I should not expect to find them in there (owing to some clash with the owner), but there was now another spray paint shop in town where they might be. Aided by the little map she kindly drew me, I found my friends waiting for me outside Daking, the rival shop.

We went in, and once again I could participate in their joy (I always go bonkers in art shops myself!) and observe their particular styles of selecting among the dozens of invitingly displayed shades: by the time Cines had chosen her set without hesitation, Jekse was still eying the shelves and had not even touched the cans yet.

After shopping for paints we went shopping for food – I was invited to prepare and eat sushi in their place. On the way to Lider superstore, we popped in a big market tent by S. Donoso where J&C wanted to show me a stall selling various products decorated with pictures of Valpo graffiti, mugs, magnets, t-shirts.

There were also some of their pieces; even the one they made and dedicated for me last January was printed on one of the magnets.

I was fingering a mug and wanted to buy it, of course, but after my friends emphatically pointed out that it was far too expensive (normally mugs that size only cost about 1500 clp, whereas these were 3000 clp) I put it back on the shelve. Besides, as they told me afterwards, there was the problem of exploitation: while nowadays there were graffiti artists who had their work printed on various products and could make some money with their art this way (see e.g. charquipunk), the painters of the pieces on these mugs and magnets got no compensation (or even asked permission) for their work being used on commercial products. This was an issue J&C thought needed to be negotiated with the printers and the retailers.

The only way I “helped” in the sushi making in the end was eat olives, drink wine, and watch Cines prepare the sushi ingredients (which Jekse later rolled inside “nori” and sliced neatly), while at the same time teaching me the basics of sushi making (most importantly rinsing the rice in a sieve until water runs clear through it) and conversing with me about art, life, work, and her dreams. But after all that I helped a lot by eating as much as I could, of course. 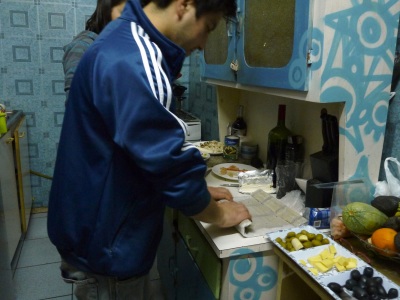 Besides sushi and wine the night was rich with conversations about big issues like art; about everyday issues like Jekse’s studies and Cines’ work and how she keeps fit and slim by running up and down the stairs in the office block and never uses the lift (because they are not safe); and about less natural issues like winged people and omnis (ufos) that have frequently been seen in Chile. We also touched the issue of free education, which is on everybody’s lips here today. According to Cines, in Chile, where most people have to pay for university education, those who are not wealthy have to take loan to study, and then find work to pay off their obligatory loans for studies. Poorer people have hard time getting good quality higher education, because it costs a lot, so they opt for the cheaper schools, which could be founded and run by nearly anybody and without credentials in the times of privatisation. Things had been different before the dictatorship when good quality higher education was free for everybody, but had not improved since dictatorship was abolished.

Cines – who besides being a self-learned painter was clearly a maths wizard to whom calculating currencies in her head was a piece of cake – works in a big construction enterprise in Viña del Mar. She likes her job and is good at it, but her biggest dream is to live by painting. Now that Jekse has been busy finishing his graduation thesis, so has Cines been busy helping him, and neither of them have had time to paint. His graduation will make life easier and happier, because there will be two of them earning money to pay the installments for the house and the study loans, and at last they can do some painting, too.

I told Cines I had seen her exhibition, which to me was impressive because it was all by women, who are still a minority among graffiti painters, and because the works expressed a sprit of happiness and joy, something unusual where I came from. She and a few other female graffiti painters had had a group exhibition opening in Santiago, which I missed. 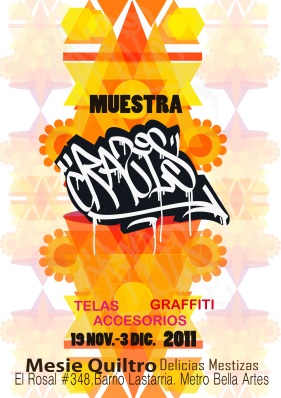 But last week on Thursday I stepped out of the metro in Universidad Catolica and after some obligatory tourist style searching I walked into a little café at the address mentioned in the exhibition brochure. I asked the owner if he knew about an exhibition of some graffiti painters somewhere nearby and he said there was an exhibition downstairs, underneath his cafe, maybe it was the one I was looking for. And yes, there, on the walls of a small and windowless but cosy looking space decorated like a living room, was a selection of small, colourful works by Crazys Crew (Cines, Dana Pink, Eney, Naska, Bisy & Shapemimape) in a mixed arrangement, as if one mutual piece. 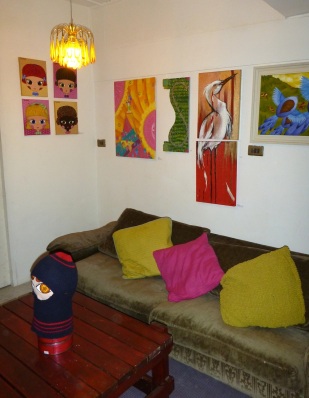 Five of the works in the exhibition were Cines’, painted on canvas with mixed technique: 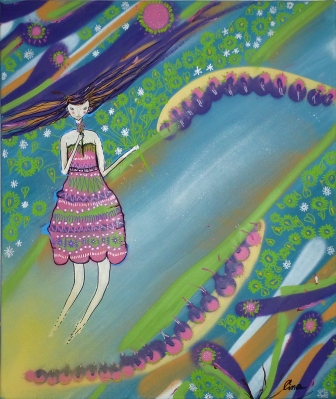 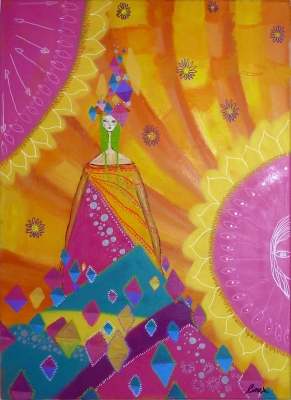 To Cines the difference between painting canvases and painting graffiti is significant: when painting on canvas you can take your time, make changes, corrections, use brush, but when painting graffiti, you have to paint fast in one go, get it right at once, and you should really use spray, not brush, to stay in the genre of graffiti. Furthermore graffiti is not closed in museums or exhibition rooms that sometimes take an entrance fee, it’s out there in the reach of everybody, freely available for all like art should be. She appreciates the differences and likes both forms of expression, they both offer her an escape to another world where she can leave her work identity behind completely and become a different person, an artist. But, when asked, graffiti is her favourite; being outdoors, painting big surfaces, living in the moment, working together, and the excitement (you can’t be a graffiti painter if you are scared of making a tag). With Crazys Crew she will be painting one of the still unpainted walls in the Museo a Cielo Abierto en San Miguel in January next year.

But how is graffiti actually made as a group, how are the themes decided and tasks shared among the painters? Through negotiation, says Cines. 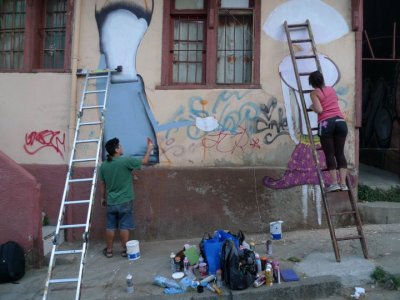 Her and Jekse’s crew of two, unkolordistinto (a different colour) has existed for 10 years now, since their teens, and it is still unusual to work as a couple in graffiti circles. Working together is easy for them, because after all these years they know what each-other is thinking and can work without consulting, whereas working with others always involves more discussion and negotiation about who is doing what, where and how. After seeing these two do everything together, painting graffiti, making sushi, choosing spray-paints in the paint shop, finishing a thesis, I could understand what she meant. That special connection they have is aptly and beautifully portrayed in their pieces, which are often about the relationship between man and woman, yet another theme hard to find in graffiti where I come from. 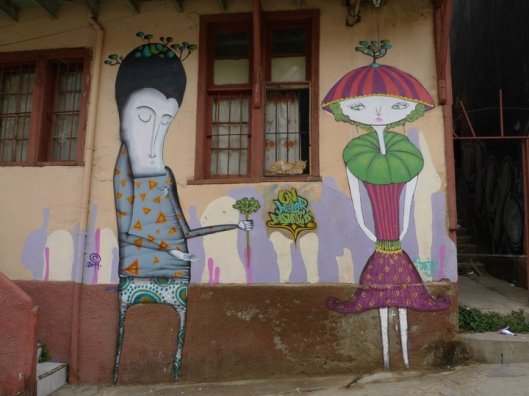 You can watch the images of this blog (and some extra ones) as a slide show below:

2 thoughts on “shopping & sushi with unkolordistinto”