Remember this type of assignment from the art lessons at school, anyone?

I remember doing it on school art lessons in 70’s, and it appears that there are some people in younger generations, too, who have done it, like Julius, who made the drawing above, and Petri, who painted the watercolor below. Obviously, the idea was to practice perspective drawing, but at the same time to give an idea of how to improve the dull suburban environment aesthetically. 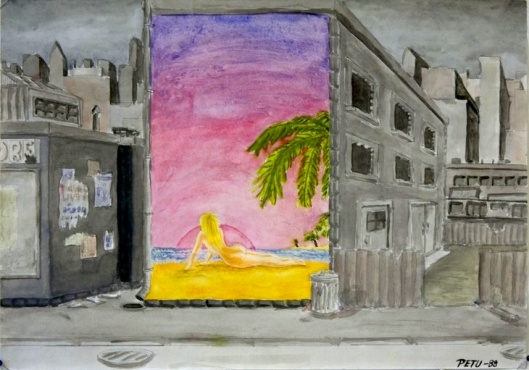 It was a cleverly designed assignment, perfect for even the laziest student, because you would nearly automatically, with very few moves, achieve the representation of a “typical” concrete suburb: start by drawing squares or rectangular shapes with pencil, then draw straight lines from their corners to the exhaust point in the horizon, then chop the long planks thus formed into identical blocks with diminishing intervals – and alas, there was the basic structure of a miserable suburb of the kind that have existed everywhere in the world since the invention of concrete elements. All this was often drawn with pencil, in graphite and white. What you had to do next, after adding lines of windows on the houses and zebra crossings on the streets, was to design a mural or two in the windowless ends of the houses to make the housing area less off-putting and a bit more homelike and pleasant to its imaginary inhabitants.

This would be the inspiring part, because now you could use colours instead of just pencil and (unless the teacher was determined to make you design senseless abstractions for the sake of learning to appreciate modernist art) use your imagination as far as it extended. That is how far we got before we moved on to the next assignment. There was never any intention to actually take us to any suburb and start painting imaginary worlds where the suburban inhabitants could escape to or even compositions of geometric shapes they could contemplate and try to understand.

Walking along one side of Avenue Departamental last thursday, taking photos of the newly painted, huge colourful murals in the ends of concrete department buildings on the other side, I could not help remembering the old school art assignment.

This suburban housing area in the low economy commune of San Miguel with it’s approximately 30-year-old, mostly shabby looking concrete blocks of flats, marked by poverty, was exactly what our art teachers must have had on their minds when giving us the assignment.

But here in Santiago, Chile, it was not school kids but graffiti painters who took the job of designing the murals – and then they actually painted them! On these 19 walls that now form the Museo a Cielo Abierto San Miguel, graffiti clearly becomes more than just a way of making its artists visible (most of the works are not even signed), it becomes a movement to lift the face of the community by giving it a new, attractive visual identity, and thereby improving the self-esteem and well being of the inhabitants (see El arte callejero se hace museo). Furthermore, (according to my graffiti friend) the inhabitants are also invited to take part in the planning and painting of the murals of their houses, whereby it also becomes a community art project.