Yesterday was the best: besides being a perfect Valparaiso day, i.e. sunny and windy, I got to watch how unkolordistinto (Jekse and Cines) painted a piece!

We had agreed to meet at noon on Sunday, so I arrived to their house about 12.30, and knocked on the door. Unfortunately it was a bit early for them, because they were still sleeping, but Cines nevertheless opened the door and let me in. While they had breakfast, I took some photos of her blackbooks and Jekse’s sketches on the walls in the studio.

Cines’ sketch from her blackbook, click to look closer.

Then they packed lots of spray cans in a big blue bag and a smaller white bag, took some pots of latex and paint rollers, and off we went looking for a wall to paint on, with Melon, their dog, following.

On the way up the hill Jekse knocked on four doors to ask the house owners if they could paint on their wall, but for one reason or other were not permitted. However, the fifth trial was successful: there was a wall on Calle Atahualpa that needed repainting. 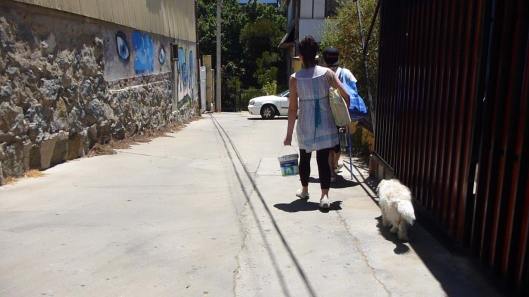 So, in the end it only took us few hundreds of meters of climbing up the street to find a good, even surface to paint on. After a short discussion about the colors and the general idea of the mural, the process itself started with painting the background with pale blue and white, covering whatever was underneath.

After that it was time to choose from the blackbooks what images exactly to paint.

Choosing what to paint.

If there are large areas to be covered with single color, it is first brushed on with latex to save the expensive spray paints, and then the edges and details are done with spray. There are many different kinds of caps for the cans to modify the thickness and shape of the spray line, and you can also trim and adjust the caps yourself like Jekse did, with a knive. When some special spray shade is needed, it can be mixed by connecting two cans and listening to the paint flow from one to the other.

To Cines the most fun part to paint are the clothes, and the most difficult part is the face – because of the shadows and all that, she said. Unfortunately she had left the correct lip color home, and it was not possible to make it by mixing two colors, because the cans she needed to do that would not connect for some reason, so she had to work out another solution. 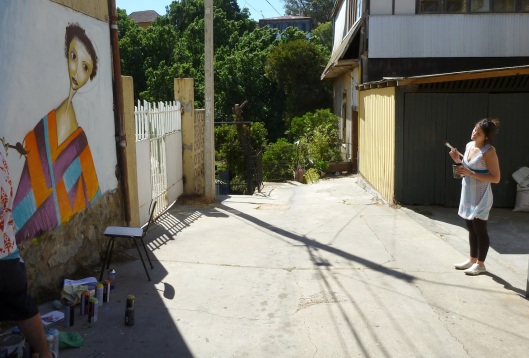 To Jekse the most difficult part was clearly to stop painting – he still kept adding details when Cines had already announced “estamos listo!” (we are ready) many times.

While my friends were painting, the mistress of the house walked by and seemed happy with the work – she even lent a chair so that the painters could reach the top of the concrete wall. Also her neighbour with his hired workers, who were paving his little yard with tiles, often stopped to look at the enfolding piece and to have a chat or make approving comments.

Finally Jekse signed the piece with “Unkolordistinto 2001-2011” and also dedicated it to me by writing my name under it, which I naturally grabbed on video for the whole world to see! Click on the photo below to watch the video.

The painting process started about 2 pm and was all finished a bit after 6 pm, which adds up to a generous 4 hours. Yes, from an art teacher’s viewpoint I also think that is quick, but to graffiti painters like Cines and Jekse, who are more used to counting time in minutes than hours on their more typical gigs, this was a long, peaceful and relaxing session, which made Cines very happy.

It just goes to show that in some art forms little amount of time does not really limit the expression, which is worth considering when having difficulties of stretching the few hours alotted for art lessons in Finnish schools to suffice for the expressive needs of the students. Like jazz or rap music, graffiti seems to be an art of presence and skill, where improvising on the basis of some already known theme and jamming together with a group in your own style are ways to achieve something more meaningful than separate individual performaces. 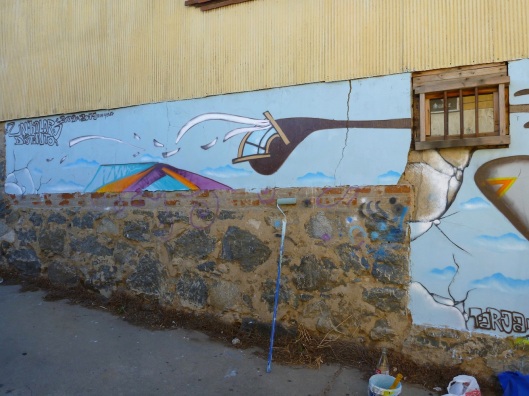 Left part of the finished piece; click to look closer. 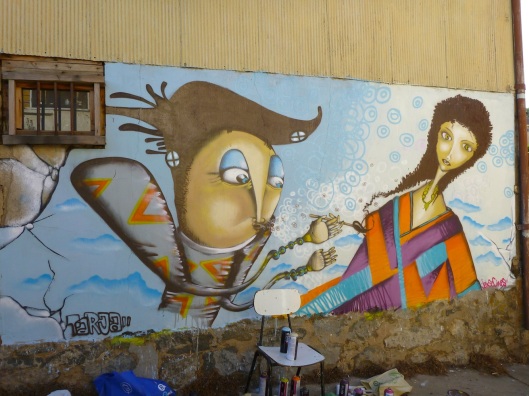 Right part of the finished piece; click to look closer.

Pleased with the outcome and happy but hungry we strolled back down the hill, left the spary cans and paint rollers in the house, and carried on further down to have a well deserved dinner at a local more-for-your-money restaurant with huge portions and a jug of beer to celebrate the successful painting session and the 10th anniversary of the unkolordistinto crew.

Click any of the images below to view the whole process. To view an image closer, click “permalink”:

A sketch in Cines’ blackbook.

The sketches on the walls were mostly Jekse’s, often doodled rapidly and many in one go.

No permission from the third house…

The owner of the fourth house was away from home.

But this house would give green light, maybe because there was already a piece on the wall…

Covering the old piece by a young friend who Jekse and Cines knew would not mind.

Choosing what to paint.

Listening to the color flow from one can to the other.

Large areas of single color are first covered with brush and latex.

Jekse redesigning the cap with a knive to adjust the flow of spray. TK 12/2011, Valparaiso.

The neigbour and the men working often stopped to watch the painting evolve.

Jekse painting the window of mind – “many people have no window to the world around them” he said.

Thank you for the wonderful day!