I am very happy to announce that my degree in equine industry is only a few final touches away. It has been a great three and half years, albeit a lot of work indeed. If we had not moved to our new home in the country last spring in the middle of the term, I dare say I would have finished my studies in three years like I originally planned.

This month, November 23st, I presented my final (BA) thesis, titled Finnhorse in the artwork of school children during a century, in the premises of our college in Mustiala. The presentation, which I gave in Finnish, was streamed to anybody interested through Renewable Equine Industry in Finland -project’s YouTube channel. It was also recorded and the recording can be watched HERE. The thesis itself, which includes abstracts both in English and Finnish, can be read online or downloaded HERE.

The study is about the representations of horses, particularly Finnhorses, in the Finnish school children’s artwork made in the art educational context during approximately 100 years. In the written thesis I reflect upon and show examples of how horses are presented in the students’ artwork in different times, tasks and roles, and how the horse-human relationship appears in them.

The subject was and is extremely interesting both from the points of view of horse industry and my background in art education. Judging from the press publicity I got in advance and during the day there were some other people who also found my subject interesting. As it happens, I have not, so far, been able to find a similar or equivalent study made anywhere else. Perhaps I should write a review of my thesis in English here on my website to find such studies and encourage others to pursue them? 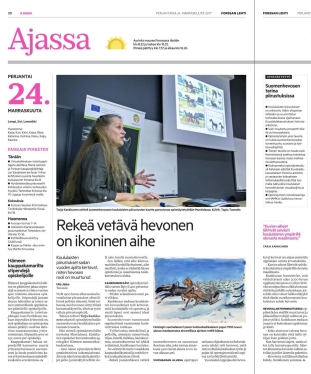 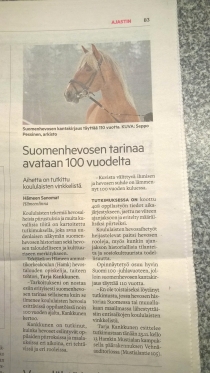 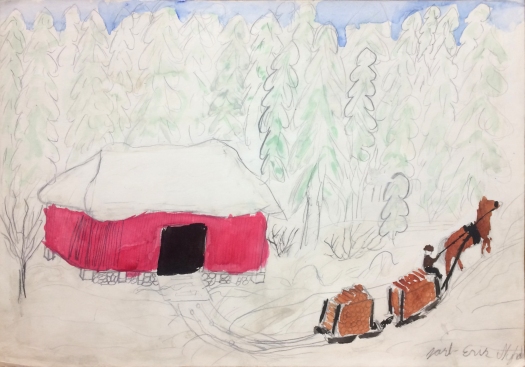 An example of my data from the 50’s: a Finnhorse pulling logs. Jan-Erik Nyholm, Svenska Samskolan, Tampere, 1954-56

All the texts or images I publish on this site IN MY OWN NAME can be viewed, cited and presented in educational, research, or other non-commecial contexts and purposes free of charge and without asking my permission, providing my name is clearly mentioned as the author and a link to the original material is provided as reference.