April 2014 was a heartbreakingly sad month in Chile. On April 1st, the day that I left Valparaiso, there were no other broadcasts on the Chilean TV besides those about the magnitude 8,2 earthquake that had hit Iqique up north. It was as if the channels had united to prevent people mistaking the news for an All Fools’ Day prank. While Chile was still trying to recover from that first disaster, a wild forests fire was caught by the strong winds and carried from behind the town to the poorest inhabited hills of Valpo. Unlike the earthquake that hit with one major blow, followed by a few smaller rumbles and moderate tsunamis, the fire grew rapidly into infernal dimensions and kept the nation in its scorching grip for several days, earning its nickname, “Great Fire of Valparaiso”.

These almost successive catastrophes remind me of the notorius earthquake and tsunamis in Chile in February 2010. Firstly, I myself escaped the calamities, both times, by just a few days. Secondly, and ironically, they all happened while president Michele Bachelet had not yet stepped down or as she had just been inaugurated as the president of Chile. What an unlucky lady!

However, things are brightening up gradually, at least in Valparaiso. I heard that while Iqiqueans have had to help themselves getting back on their feet, voluntary relief has been flocking to the devastated Valparaiso hills with unprecedented eagerness, bringing clothes, blankets and other necessary items in such quantities that it has become necessary to limit the flow of helpers. Even animals are considered. My veterinary student friend told me that she and her fellow students went around the hills for several days giving medical care to the wounded pets. I trust my street dog friends belong to this category – to them Valparaiso with its people is one big home, after all.

But I also heard other kind of good news from Valpo a few days ago. Standing in their hanging cradles, rocked by the same winds that caused the forest fire to spread and consume nearly 3000 homes of fellow citizens before their eyes and spoil the air with unhealthy fumes, my graffiti painter and artist friends Cines and Jekse completed “Solsticio de Invierno” (“Winter Solstice”), their biggest mural so far!

Now, at last, I can write this blog article and upload some of the pictures I took while observing their painting process in March this year. This was not possible while I was still in Chile, because the artists wanted to avoid public attention as long as possible, at least until the work was well under way. (In the world of street art such caution is understandable). I had the privilege of seeing the evolving sketches early on, but even to me the final scope and location of the mural was revealed only after the preparations by the wall had began.

Cines and Jekse had warned me, with joy and zeal sparkling in their eyes, that the piece was going to be five times bigger than “Equinoccio de Otoño”, (“Autumn Equinox”) the previous big one they painted on Pedro Montt avenue in 2013 (see the official video in Youtube). However, their message did not really sink in until I finally stood next to Edificio Espíritu Santo, a 13-floor apartment tower by Plaza Victoria, looking up at the empty white wall and wondering how long my neck could take the doubled back position needed for observing this process, and if the alternative way – accompanying the painters in the hanging cradles up on the wall – would really be a viable option for me.

The towering white wall is waiting!

I had ample time to consider my options, because there was a lot of preparations to do and some problems to solve before the painting itself could start. A well over ten meter scaffolding against the shallow middle part of the three-partite wall structure was built, the private parking area between Espíritu Santo and the next apartment block behind it was rearranged and Pasaje Lira, the passageway separating Espíritu Santo and the Ripley department store buildings, was closed from public with a temporary wall. While Jekse was busily constructing a second temporary wall, a gate and a mesh fence in the other end of Pasaje Lira with his godfather and Cines helping, Pablo, a videographer friend, was taking pictures and video shots here and there with the intention of immortalizing the project in a short movie. After the privacy of the project was secured, two separate hanging cradles and the respective security ropes were hung from the roof and their functionality checked. Only then was it possible for the maestros to start filling the cracks and scraping down the uneven surfaces so that Jekse and Cines could finally start outlining the design on the wall with spray. 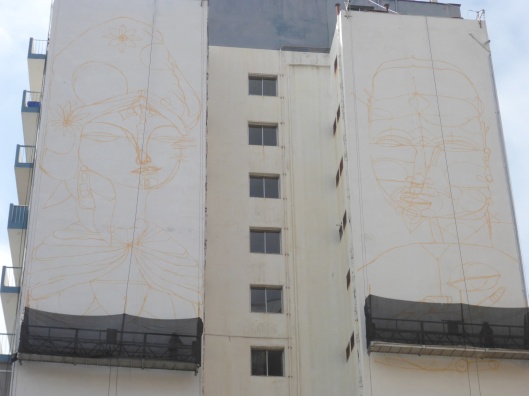 Artist in their cradles outlining their respective halves of the mural.

In due time Pablo’s video will appear on Youtube, and who knows, I might appear for one tenth of a second in the corner of one of his frames, capturing my own little videos and photos of Cines and Jekse working. Although I had to leave Valparaiso without seeing my friends finish the project, I did see how they enjoyed opening and arranging the huge buckets of foundation colors and how they lost count of time and spent whole days rolling those cool latex tones into the shapes they had outlined on the wall. I even had a chance to spend some hours high up in the hanging cradle next to Cines, observing one of her first stints of spray painting while rocking in the wind between the earth and the sky of Valparaiso. 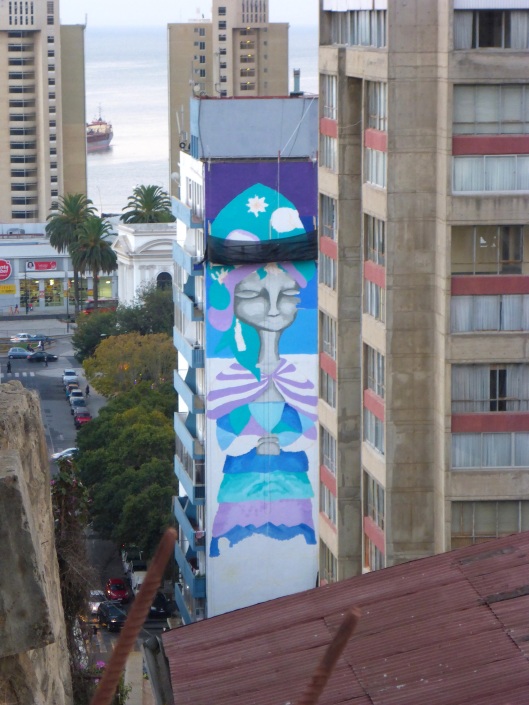 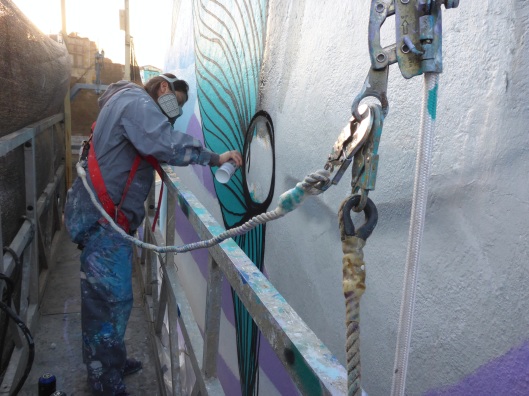 In the cradle with Cines 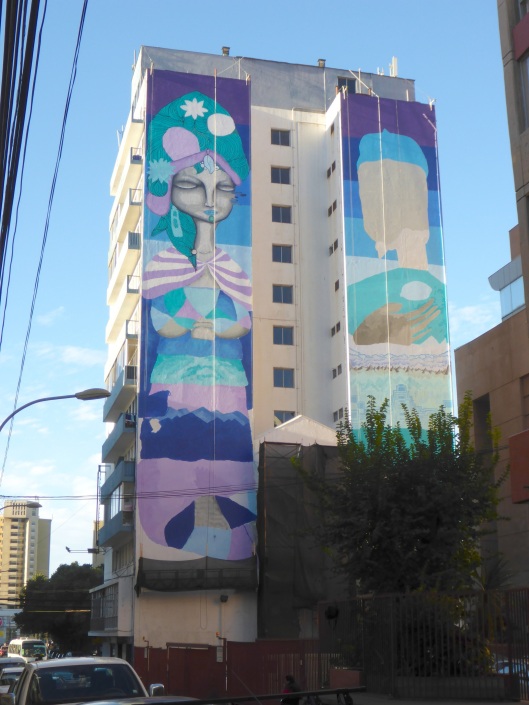 My last look at the mural before leaving Valparaiso

All the texts or images I publish on this site IN MY OWN NAME can be viewed, cited and presented in educational, research, or other non-commecial contexts and purposes free of charge and without asking my permission, providing my name is clearly mentioned as the author and a link to the original material is provided as reference.