Tuesday 11th of March was Michele Bachelet’s presidential inauguration in Valparaiso – and I was there on the street witnessing it along with the Chilean people. To be honest, it was not quite as big a party as I was expecting, but that may have been because the main streets in Valparaiso were clearly emptied well in advance. Even the main route between Santiago and Valparaiso, which is at least as important as the road between Helsinki and Turku in Finland, was  blocked from ordinary traffic. They don’t take any risks here!

As a Finnish tourist who is used to the often silent streets of our own cities, I hopped along the spacious Avenida Independencia, happily unaware that it had been barred with movable iron fences precisely to keep away, for example, people like me. As I approached the northern end of Independencia, there were more and more carabineros standing along the avenue next to their fences, and less and less (other) people walking past their noses. Eventually I came to Avenida Argentina, which is normally full of buzz, but now kept clear for the convoys of high ranking visitors, so the rest of us, the common folks, had to cross the square to the northern side of the avenue to view it all from a secure distance.

There, facing the mighty Congress building towering on the eastern side of Avenida Pedro Montt – which was completely and neatly decorated with various brigades of Chilean soldies in their specific military costumes – I settled in the crowd and waited patiently for my glimpse of the newly inaugurated president together with a very cheerful bunch of other enhusiasts. Then it started: first came the horses.

(Note: the constant screaming on the previous video is not by a baby, but by a woman who was also waving a pair of women’s knickers at the carabineros, inviting them to come to “mami”!)

Then came the new president, Michele Bachelet, smiling, saluting her people, thanking them for their attention and support. (For a short moment I felt that she was actually looking at me!) I had bought the 500 peseta flag with her image on it just on time, but when I tried to wave it and film at the same time, I accidentally switched the video mode off. Luckily I still managed to capture a reasonably good photo of her. 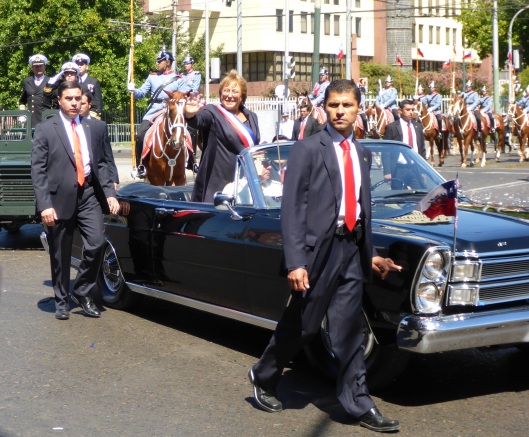 …I accidentally turned the video off, but I managed capture her quite well in a photo

Then there were more horses:

After the president and the horses had gone past, I ventured to move closer to the venue along Avenida Pedro Montt, where I saw huge red flags flying in front of the bus terminal, opposite the Congress. They were the flags and banderoles of  socialist and communist youth organisations who had apparently been granted the best viewing places close the Congress portal, next to the platform built for the media.

The military orchestra from behind

The most impressive uniforms were nearest the venue

Sometimes it was difficult to see anything

These people were quick to start chanting in praise of certain socialist presidents of Latin America and some other socialist politicians upon seeing them descend the main portal, one by one, and being guided into bulletproof safety cars. “Evo, amigo, el pueblo está contigo” and “Olé olé olé oleee, Evoo, Evoo”, they sang to Evo Morales, the president of Bolivia, and to Rafael Correa, the president of Ecuador, they chanted “Ooh, dale Rafael, Rafael, Rafael dale Rafael” and “Correa, amigo, el pueblo está contigo!” The unison chanting was so effective that some of the political celebrities could not resist coming across Pedro Montt to shake hands and exchange a few words with their supporters – and maybe gain some positive media coverage on the side – before leaving the scene. This is how I was able to shoot a few short bits of video of Rafael Correa and the young communist student movement leaders Camila Vallejo and Karol Cariola. 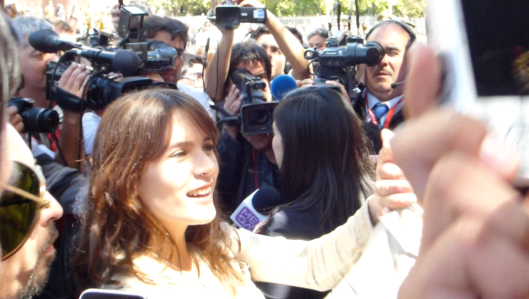 Camila Vallejo, the young communist celebrity, who has become known as one of the key figures in the fight for free and better education in Chile

Karol Cariola, a midwife and a young communist politician, who also seems to be looking at me! I wonder if I was captured by any of those cameras and shown all around the world?

Only afterwards I (the ignorant gringa) heard that the (controversial) president of Venezuela, Nicolas Maduro, who had also been expected to participate the inauguration, did not arrive after all. Maybe it was because of him that there were almost more carabineros and soldiers in the streets watching the procession than ordinary citizens?

Anyhow, I was very happy to be there and not at all bothered by the extensive if not slightly exaggerated safety measures. Above all, I am wishing Bachelet the best of luck, and a lot of courage, heart and wisdom that she may meet the expectations of her people and truly succeed in her job as the new captain of Chile!