September 11th came and went, and the victims of the monstrous terrorist attack to U.S. have been commemorated here in Finland as well as all over the world.

Another “nine eleven” has also been remembered: 40 years ago, on September 11th, the U.S.-backed military coup led by General Augusto Pinochet took over La Moneda, the presidential palace in Santiago, Chile.

Refusing to leave the palace, president Salvador Allende used his last opportunity to give the Chilean people a radio speech, in which he said that he would pay for loyalty to the people with his life. Here you can listen to his original last speech in Spanish. Here is how he ended the speech:

“Workers of my country, I have faith in Chile and its destiny. Other men will overcome this dark and bitter moment when treason seeks to prevail. Keep in mind that, much sooner than later, great avenues will again be opened, through which will pass the free man, to construct a better society. Long live Chile!  Long live the people!  Long live the workers! These are my last words, and I am certain that my sacrifice will not be in vain, I am certain that, at the very least, it will be a moral lesson that will punish felony, cowardice, and treason.” (See: Last Words by Salvador Allende / Ultimas palabras por Salvador Allende)

Only moments after this, the democratically elected president Salvador Allende was dead, and a 17-year repressive dictatorship started in Chile. According to the official, widely accepted story at the time and even today Allende took his own life, but many of his supporters found and still find this account unconvincing. (See e.g. wikipedia: Salvador Allende)

On September 12th this year there was a television documentary on a Finnish National Broadcast (YLE) channel about the humanitarian actions of the Finnish diplomats Tapani Brotherus and Ilkka Jaamala who were based in Santiago those days (see Book review: Finnish diplomat in Chile helped 2500 escape Pinochet terror). Brotherus helped altogether about 2500 Chileans, who were persecuted – and in danger of being executed or assassinated – for their loyalty to Allende, by hiding them in his home and, later on, assisting them to escape the country. Only 182 of these people ended up in Finland, but even though the number is small, it is significant for representing the first political refugees ever received by our nation, thus breaking a crack into its previous policy of total rejection. Since the dictatorship was overthrown in Chile, families have reunited and some of them have returned to Chile or moved to other countries. Those who stayed, have become well integrated into the Finnish society, and even I know a few of them.

As days are getting shorter, darker and colder in Finland, my thoughts are frequently escaping to Chile on the other side of the world, where spring is now on its way. The way Chile appears to a foreigner like me these days might make it seem impossible that the coup d’etat and all the atrocities that followed it took place only forty years ago. But they did happen, and the memories are still torturing the minds and hearts of many Chileans and even their children, ready to pop out in unexpected situations. For instance, once, when I was flying from Santiago to Frankfurt, a fifteen-year-old girl, who was seated next to me, told me that her grandmother had been murdered by Pinochet.

Last December in Valparaiso I met a man that must be one of Allende´s most adamant supporters, Compañero Yuri Zuñiga, an independent leftist, who has taken as his task to preserve some of the cultural heritage of the Allende era and keep his memory alive in a very special way. I found him by accident on a hot summer day when I was walking down Almirante Montt, taking pictures and glancing through the street-level windows, until one of them made me too curious to carry on.

The sign over the window, which was wide open and allowed a good view to a very interesting interior of tables loaded with old books and walls covered with colorful portraits of very famous Chilean political and cultural figures of 60’s and 70’s, claimed that I was looking into “Library of the people, President Salvador Allende G., Museum of historical political memory, Fight, work, study”. 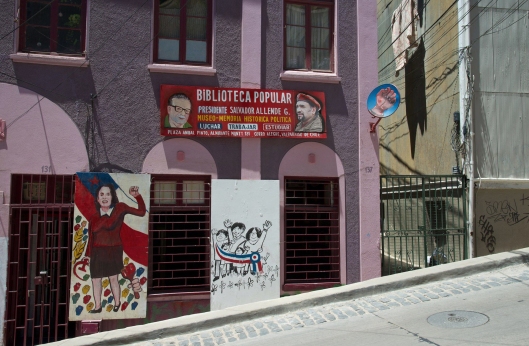 The sign over the library windows features Salvador and Yuri. (Photo © Philip Dean)

As I was standing there, peeking through the iron-barred but otherwise open door, a man with friendly eyes, neatly trimmed black beard, white sideburns and curly locks appeared next to me from somewhere and undid the bars. He was wearing a dark red Che Guevara style beret and a printed black t-shirt featuring an image of young Allende surrounded by his people, with a Chilean pennant attached to one side, and a subtext underneath saying “Comrade Allende, now and forever”. I quickly realised that he was the proprietor, overcame my innate shyness and asked him with my rather basic Spanish if I could have a look inside. He must have noticed my curiosity and appreciated it, because he seemed very happy to let me into his extraordinary temple of 1970’s political and cultural passions and nostalgia. 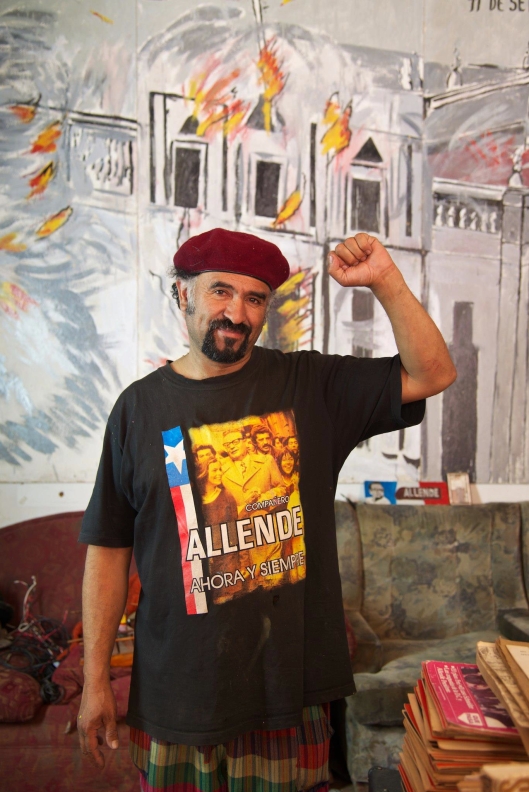 The photographs on this blog-entry, which I wrote to commemorate the 40th anniversary of the Chilean September 11, to pay homage to Salvador Allende, and to introduce his dedicated compañero, Yuri Zuñiga, are from that visit.

My first view entering the library.

Allende and his friends of revolution.

The library was filled with rare books, such as these two about political posters and street art, but they were not for sale.

There were some big paintings visible in the alcove at the back of the library. (Photo © Philip Dean) 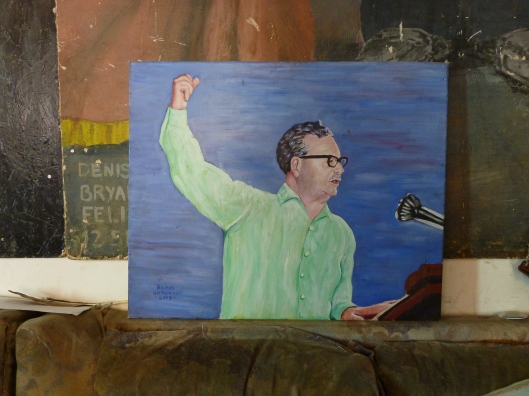 A portrait of Allende giving a speech

The mapuche indian hero Lautaro (1534-57) who introduced use of horses to the mapuche.

A painting of Yuri’s library on calle Almirante Montt

A 3D rendering of the port town Valparaiso, and a couple of nude female figure paintings.

The scrap-book wall over the entrance. 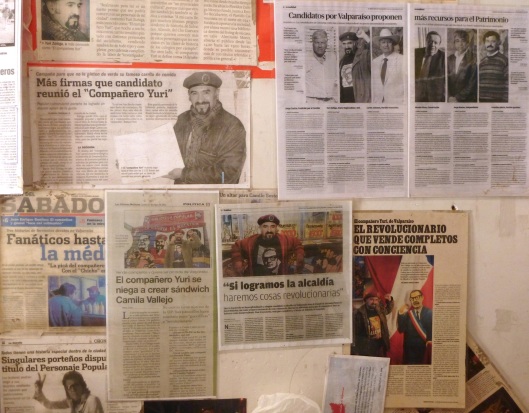 Some of the articles about Yuri, “the revolutionary who sells hot dogs with conscience”.

In this article Comrade Yuri defines himself an Allendist at heart and considers himself a “cultural provocator” who, besides selling sandwiches and completos (Chilean style hot dogs) has become a teacher whom people frequently ask questions about political history.

Yuri, who was a candidate in the city council election of his hometown in 2012, thanked his voters by means of posters illustrated in BRP style: “I want to thank all the neighbors, friends, comrades, and sympathizers for their support with their vote on the 28th of last October where I received 3500 votes, and tell them that the fight continues. Let’s win!”

Yuri thanking his voters by means of a poster illustrated in BRP style. BRP, short for Brigada Ramona Parra, is a still active crew of Chilean political muralists and street artists.